Since 1984, when Eurovac pioneered Body Shop Dust Extraction Systems in North America with the introduction of the Eurovac Mark I, leading Body Shops have enjoyed all the benefits of dust-free working conditions … and saved money at the same time!

You don’t have to work in a dusty shop! Install a Eurovac Dust Extraction System, and its powerful turbine pump and cyclone will remove virtually all sanding dust at the source, ensuring that your shop maintains a clean, healthy work environment.

You’ll reduce the chance of dust contaminating your painting area, and cut the time and expense of labor spent on clean-up. And because sandpaper is kept free from dust, it lasts longer – and that’s another saving!

To meet the diverse needs of the Auto Collision & Repair industry, Eurovac has a solution for virtually every application and budget. From an economical Portable System to a powerful 75HP Eurovac III Central System.

Eurovac drops have either a single or double inlet. The inlets for Eurovac I and Eurovac II 5HP and 10HP systems usually have a microswitch which turns on the vacuum system when the inlet flapper valve is opened. Eurovac III and larger systems are usually continuous run systems because frequent starting and stopping of the larger motors uses a lot of extra electricity, and it is very hard on the electronic components. Each drop includes a hose hanger and tool hanger.

We usually recommend hanging drops (2″ vacuum hose attached to the overhead pipe) placed 10 to 15 ft from the wall, at the door level of the car being worked on. The inlets are usually hung 6.5 ft off the ground (low enough that the shortest person can reach them, and high enough so that people don’t bump into them). The theory behind this is that the equipment should be out where the technician is doing the work as opposed to on the wall, where he has to walk 10 to 15 feet to plug and unplug his vacuum hose. We recommend wall-mount drops (2″ pipe running down the wall of the bay) where a shop does not have dedicated bays; e.g. vehicles are not always put in the same spot. However, some shop owners prefer wall-mount drops because they think that hanging drops will “get in the way”. 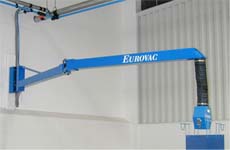 Pendant Drops and Articulated Arms
Eurovac has pendant drops available which consist of a hexagonal box with two inlets, two air outlets, two hose and tool hangers, and an electrical outlet. Eurovac supplies either a 110v or 220v electrical outlet only. The wiring for the electrical outlets must be done locally to meet local codes. The pendant drop is hung from the beams by two small chains and has a 5″ cosmetic hose cover to hide the vacuum hose, electrical wiring and air lines. The pendant drop can be mounted on a 15 ft articulated swing arm. We usually do not recommend the pendant drop/arm because they increase the price of the system significantly, without adding a lot of functionality; but, they look good!

Usually we put a double-drop between every other bay with a single-drop being added to an odd bay at the end of a pipe run. This is less expensive than single-drops between every bay because one technician is usually assigned to two bays. We usually put a single-drop outside the prep stations, but inside the curtain.

To make the system user friendly, it is important to have air available at the vacuum inlets so it is easy for the technicians to plug in their vacuum hose and air hose at the same place as outlined in the integrated Air Line section. For new shops with hanging drops, it is important that the compressed air lines run parallel to the vacuum lines as opposed to along the wall. By having compressed air lines at the drops, hose reels are usually unnecessary.

Except for Eurovac II 4-man budget systems and detail systems (which use PVC pipe), we use 14- and 16-gauge galvanized metal thin-walled tubing. The fittings have expanded ends that fit over the end of the pipe and heat-shrink tape holds everything in place and assures an airtight seal. Metal pipe is preferred because static electricity which can cause static shock does not build up in metal pipe. When PVC pipe is used in a dust extraction system, we provide grounding wire for grounding the pipe.The pipe is graduated from 2″ at the end of the runs to 3″ at the pump on Eurovac I and Eurovac II Central Systems, and from 6″ at the pump on most Eurovac III systems, and up to 8″ at the pump on the largest systems. As the piping gets closer to the pump, larger diameter pipe is required to accommodate the CFM from the “feeder” branches. In general, 2″ pipe will accommodate two technicians sanding and 3″ pipe will accommodate five technicians sanding, while maintaining the required airspeed to move the dust through the pipe. 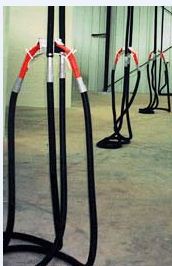 It makes a lot of sense to incorporate detail drops with the dust extraction system. The efficiency of a reliable detail system laid out properly will pay for itself. A Eurovac detail system consists of a 15′ or 25′ x 1-1/2″ vacuum hose with a “duck foot” cleaning tool which is placed in a tool hanger when not in use. The tool hanger incorporates a rubber flap, which the tool “sucks up” when placed in the holder, cutting off the airflow. PVC pipe is usually used because static shock is not a problem and it will not rust if water gets into the piping. Single hanging drops are usually placed between every car by the doors of the car. The drops usually include air lines to allow the technician to clean cracks in the dashboard etc. with an air gun. For wash bays with walls we usually only put one wall mount drop in the bay and a 25′ vacuum hose. If there is water in the detailing process we provide mobile wet pick-ups for one- and two-bay systems and in-line wet pick-ups where the PVC pipe joins the metal pipe for larger detail operations.

It doesn’t cost much to add office drops to a dust extraction system and it doesn’t require a larger pump because the office areas are usually cleaned “after hours”. For existing shops with drywall in the office areas, the drops are usually placed in the shop by the doors to the office. In new shops, the contractor usually installs 2″ PVC pipe (readily available in any large hardware outlet such as Home Depot). The wall vacuum inlets are supplied by Eurovac. The PVC pipe installed by the contractor is hooked up to the Eurovac piping when the Eurovac system is installed. For large systems where the pump is a long way from the offices, a remote stop/start can be installed by an electrician.

The Central Chemical Dispensing System automatically mixes cleaning chemicals (including a rug shampoo, which is heated up to 130 degrees F.), and pumps them to the detail workstations. The chemical dispensing system is installed in conjunction with a Eurovac I or Eurovac III industrial-grade turbine pump and induction motor.The hanging or wall mount chemical dispensing workstations are strategically located between each detail bay. Chemicals are applied with dispensing guns attached to 25-40 ft. color coded coiled hoses. The system also features an air gun and compressed air line for blowing out debris from cracks and crevices.

Eurovac systems are engineered to provide a constant air speed of 4,500 feet per minute. This is accomplished by using 2″ drops and 2-1/2″ pipe at the end of the pipe run, with 3″ to 6″ pipe at the pump (depending on the size of the system and the number of drops on the pipe run). Both PVC and metal pipe is available. When water is not a factor, we recommend metal pipe because of the longer radius bends, which maximize performance and minimize clogging.